A List Of Top 10 Python Frameworks For App Development 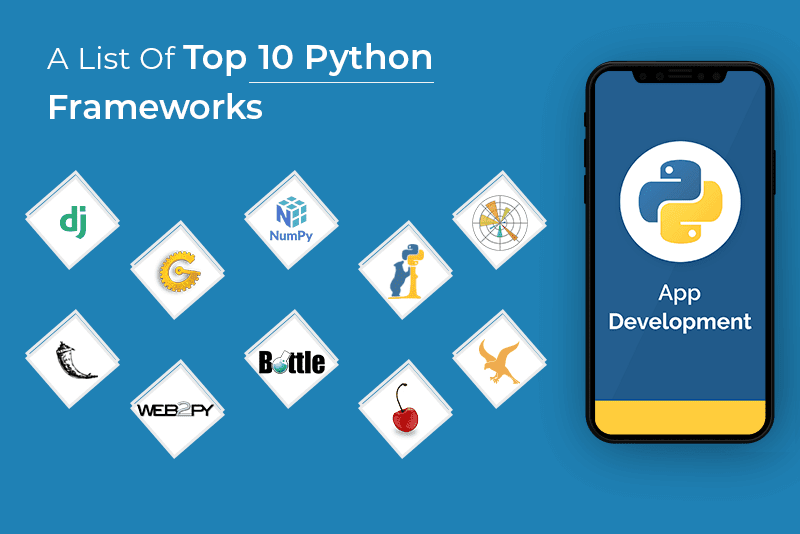 Artificial Intelligence, smartphones, supercomputers, and other such technologies are continuously revolutionizing our world. Using such technology, we may construct a number of mobile apps and programs in the languages that they support. Python is one of the most common programming languages among these.

Python was the most popular language in 2018, according to Stack Overflow’s developer review, outperforming C# and PHP. With 93,197 exceptional firms, Python’s development suggests that it has become a high-level platform.

Python’s maturity, enhanced libraries, and suitability for both small and large web development projects allow it to outperform other languages. Python developers are in high demand in a variety of industries, including machine learning, databases, cloud infrastructure, UI/UX design, data analysis, web scraping, security, mobile development, and APIs, and that’s just the beginning.

The primary use of the platform is for data analysis and web development. (As per Opensource.com)

Django took first place in the ranking because it is an open-source Python platform. This technology is very easy to use and allows you to create sophisticated data-driven websites. The platform has a mature and sophisticated underbelly, with libraries, templates, and APIs that allow for the creation of scalable web development projects. Django is the most well-known Python framework used in applications based on this language, and it’s employed by a slew of well-known websites including Instagram, Pinterest, Bitbucket, Nextdoor, The Washington Times, and so on.

TurboGears is a web application development platform that includes SQLAlchemy, Repoze, WebOb, and other WSGI components. TurboGears is based on MVC architecture and enables fast website creation because of its features that allow it to function as both a full-stack or microframework solution with MongoDB as first citizen storage.

Numpy is a Python library that aids in the manipulation of arrays. Its library may be used to process multidimensional arrays of objects as well as provide a variety of array processing capabilities. With sophisticated data structures and utilities, Numpy extends offshore Python development by ensuring high performance.

Pandas is a Python library that provides easy-to-use data structures and data analytics tools to developers. The technology is primarily used in academic and commercial areas such as finance, economics, statistics, and so on.

Matplotlib is a Python plotting library that comes with an object-oriented API and allows plots to be incorporated into the program. The library also supports Python scripts for generating 2D charts. It’s similar to a generic graphical user interface (GUI) toolkit that supports a variety of graphs and plots, including histograms, power spectra, bar charts, error charts, and so on. The PyPlot module in the library makes it easy to plot things by providing attributes such as color line styles, formatting axes, font properties, and so on.

Because Flask is a micro-web framework, it doesn’t need any additional tools or libraries. It has integration with the development server and unit testing support. This Unicode-based platform allows you to transmit queries in a RESTFUL manner, which makes it appealing for application developers to start their projects.

Web2py is a Python-based platform that enables you to develop dynamic web content. Since it was first released in 2007, the technology has included a code editor, debugger, and deployment tools. Web2py allows you to write dynamic web content using Python.

The bottle is a WSGI micro web framework, which means it’s a single file with no dependencies other than the Python Standard Library that contains a distributed module. The framework has all of this, as well as request dispatching via URL, key/value databases and templates, and built-in HTTP server support.

CherryPy helps integrate CRUD (Create, Retrieve, Update, and Delete) features into applications and makes it easy for developers to manage a project from anywhere using a user’s browser. It allows an application developed with CherryPy to run on many HTTP servers, has an extendable plugin system, and includes built-in testing support.

Falcon is a free, open-source Python framework that’s ideal for creating small-scale apps and backend. The architecture style supported by the framework, which is known for its quick performance, makes backend and microservice creation simple. It includes numerous add-ons, templates, and complementary packages that offshore python programmers need to build apps.

Which is the most popular Python framework?

Python and its mechanisms allow creating a strong and flexible application with less code. What Python platform do you think works well for web application creation, and why? Include your thoughts in the comments area below.

Overall, we can see that python app creation is rapid and adaptable. Because of Python’s code’s flexibility, there’s a chance to develop several sorts of applications utilizing it. Also, for various sorts of apps, numerous libraries are accessible – one reason why businesses choose Python over other languages.

As a result, it’s critical to engage a team of specialists that can provide you with expert advice for an app developed in Python.

Also visit on our latest and updated blog on Python framework for mobile app development.

Alka Singh is a strategic content writer and marketer with a decade of multi-domain experience with B2B & B2C clients. She help businesses build thought leadership and generate organic traffic with top 10 SERP results.