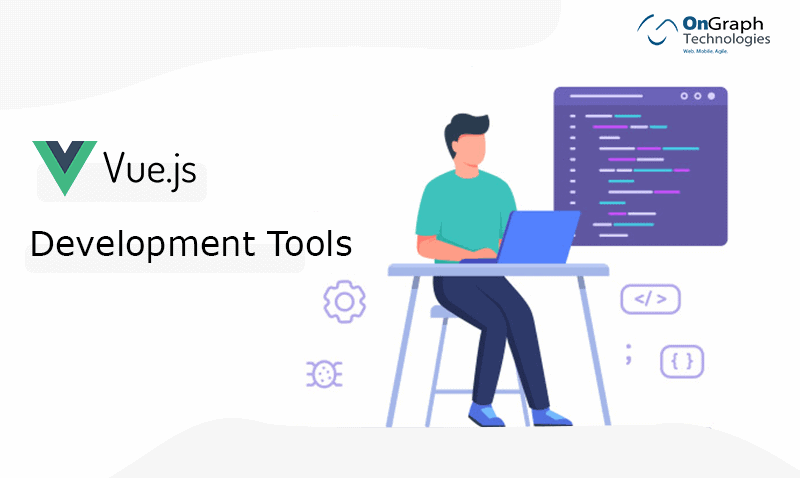 Gone are the days when VueJS was just an advanced JavaScript framework. Today, it is one of the widely used frontend frameworks which has grown in popularity recently due to the ease it offers both in terms of learning as well as building applications. VueJS enables developers to create UIs efficiently and elegantly. Whether you are a beginner or an experienced developer, the in-detail documentation, easy learning curve, and functionality driven structure makes it a favorable choice.

A popular JavaScript framework to create user interfaces and single-page applications, thousands of VueJS development tools have probably been created by its large and active open-source community. Many businesses as well as startups hire VueJS developers so as to leverage all the benefits of it.

While selecting VueJS development tools for your project, it is essential that you do so with the right tools. We have compiled this list of top 8 VueJS development tools considering the entire VueJS development cycle based on the usefulness, uniqueness, and effectiveness, as per their GitHub and Stack Overflow popularity or star ratings. But before getting to the list, let us first understand what VueJS is and how it is useful.

VueJS is a JavaScript framework that enables developers to build single-page, front-end applications for both web and mobile. As per many experts, VueJS is ranked high in the category of the satisfied JavaScript framework as it enables a developer to quickly change the content, and doesn’t even let the page reload. Many big tech giants such as NASA, Adobe, Monito, Chess.com, and Gitlab have adopted the VueJS framework for their projects.

With VueJS development tools, one can save development time and deliver faster to production. Undoubtedly, the framework is a growing sensation and you should use it in your next project without any doubts.

Best 8 VueJS Development Tools For Use in 2020 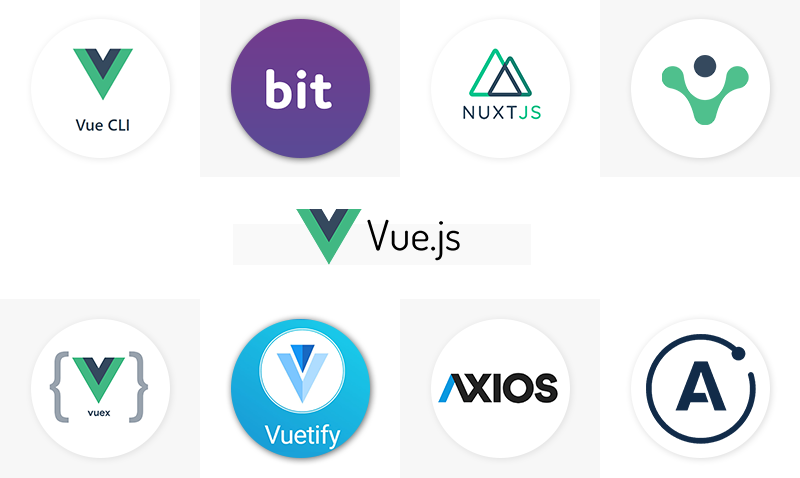 Just like in any other JavaScript framework, one can’t do much on Vue without a CLI tool. It enables you to create project structures and deploy boilerplates rapidly. It also enables you to build instant prototypes to exhibit new features.

Besides the usual bells and whistles, the Vue CLI also offers much more support for web development tools such as Babel, ESLint, TypeScript, PostCSS, PWA, Unit Testing, and End-to-end Testing. The tool is also compatible with extensible third-party plugins that are created by the community.

Additionally, Vue CLI does not even require ejecting. That being said, with the Vue CLI, it is possible to do more in terms of customization in comparison to other frameworks. One of the most significant features of Vue CLI is its Graphical UI which enables you to develop new projects and also manage them conveniently.

An amazing way to create the next-gen Vue component library of your team, Bit solves the problem of sharing and collaborating on UI components across repositories. It is a strong way to compose UIs with shared components, independently built, versioned as well as updated.

You can easily host and organize your components in the bit.dev platform. If a component library is like a CD music-album, the Bit.dev happens to be like iTunes. Bit.dev uses the CLI tool of Bit to let you version and push independent components from any local project to a Bit.dev collection, where they are documented, organized, rendered, and can be imported/installed.

Your team can search, render, install and update any component in Bit.dev from any new project. Features such as rendered sandbox, auto component-docs and more are all available on the platform out-of-the-box.

Bit tracks dependencies of every component and versions it as a stand-alone unit of code. Also, it ensures that the shared components are reusable truly by developing and testing them in an isolated environment, before exporting them to a bit.dev collection from their local projects.

The very first step in building your applications after you have VueJS setup is to arrange a good boilerplate which helps you to avoid writing code from scratch. There are a number of options for developing boilerplates, but NuxtJS enables you to build many types of applications like Single Page Applications (SPA), Progressive Web Applications (PWA), Server-Side Rendered (SSR), and Static Sites.

Nuxt makes your development process faster as it has a modular architecture and over 50 modules which support tasks such as adding Google Analytics, getting PWA benefits, or generating a sitemap.

Nuxt implements best practices of VueJS and NodeJS through its bundle analyzer and offers out of the box performance tuning.

Many developers struggle with considerable state management issues. Lack of proper control of state would imply that an application can be unpredictable. Vuex centralizes all state management functions and only allows state to be mutated in a predictable manner.

Mutations are permitted based on State, View, and Actions. The state defines the applications’ truth which the view displays to the user and actions cause the state to change, thus restarting the cycle of mutation.

If you are familiar with any other JavaScript framework, then the concept of routing should not be new to you. Routers are used so as to map application URLs to components. Vue-router performs this task amazingly and supports a component oriented router configuration.

Additionally, it also supports router params, querying, and wildcards so as to allow for complicated routing. Features like transition effects that make changing routes more appealing to users as well as links with active CSS classes make the vue-router offer a lot more as compared to other frameworks.

Vue-router also offers the possibility to choose between hash mode or HTML5 history. Since it affects the user experience, it is extremely important, especially when the nature of the application needs the users to navigate to previous pages.

As the name suggests, Vuetify is a combination of the words “Vue” and “Beautify” and will do the same for your application. It is a graceful library of handcrafted UI components that helps you to build beautiful applications even when you are not a designer.

It offers over 80 components based on the Material Design Specification with off-the-shelf project scaffolding through its Vue CLI plugin. SSR support is built-in as well. These components include Banners, Alerts, Buttons, Badges, Progress widgets, Form inputs and controls and more.

Axios is a popular third-party library to create and manage ajax requests. The team of Vue’s go-to choice has been Axios after the separation of “vue-resource”, the once “official” ajax library of Vue from its repository. This has led to a rise in popularity and usage of Axios.

It’s for good reason, though not part of the official Vue repository, Axios is quite similar to its predecessor, and is universal, has TypeScript definitions, and supports cancellation. One of the tips to use Axios is that, in case your server doesn’t support promises natively, you are required to provide a polyfill yourself.

A versatile tool, GraphQL is used to harness the potential of APIS. It enables you to query for just the right data that you need for your application or function. One of the most convenient ways of using GraphQL for Vue is Vue Apollo.

The components of Apollos help to use GraphQL in a quiet declarative manner. Apollo, at its core, provides a Schema Language for the back-end application as well as a Query Language for the front-end for easy data exchange. It also provides support to SSR so that your HTML can be rendered on the server-side.

Hope this collection gave you an idea about the many VueJS development tools to make your project spectacular. However, if you are in search of a VueJS development services for your project who is proficient and well-versed with the above tools, then you can hire VueJS developers from us to build user-friendly, lightweight, and swift interfaces as well as beautiful applications.

Just drop us an email with your project requirements. Our team will reach out to you very shortly with the right solution to your query. Till then, give a try to these wonderful tools and have fun with your applications.

Priyanka has been the technical content writer at OnGraph Technologies since 2020. Her passion for educating people in all aspects of technological innovations and advancements flows through in the expert industry coverage that she provides. In addition to writing Company blogs, Priyanka also provides technical SEO and copywriting services for businesses of all sizes.