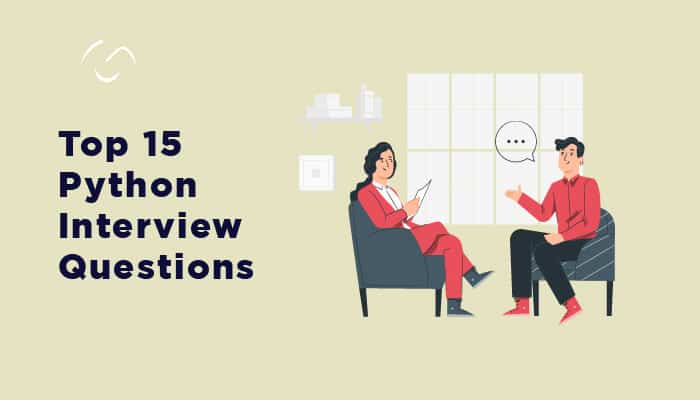 Python will continue to be one of the most widely used and popular programming languages in the business, regardless of how many languages a programmer learns. It’s a popular choice among both new and experienced programmers.

We’ve put together a list of the most often asked Python Interview Questions and Answers to help you prepare for the Python interview questions you might be asked during your interview.

We’ve covered all of the most commonly asked basic and advanced Python programming questions in our list of Python Scripting interview questions, along with extensive solutions to help you breeze through the employment interview.

To assist you in preparing for your upcoming interview, we have covered practically all of the relevant Python interview questions for freshers and experienced applicants.

This comprehensive list of Python interview questions will help you ease your Python programming job interview.

1. What is your understanding of Python?

Python is a scripting language that is extremely comprehensive, interactive, and object-oriented. It was created with the intention of making the text more readable for internet users. Apart from punctuation, it uses a variety of keywords in other languages. Unlike other languages, it contains fewer syntactic structures. Python is used to create AI-based intuitive web and mobile app development.

2. What are the benefits of using Python?

Python is a programming language that features objects, modules, threads, exceptions, and memory management that is automatic. Its advantages are well-known. It is simple and straightforward to use, portable, extensible and has a built-in structure while being open-source.

3. What is pickling and unpickling?

Pickle takes any Python object and converts it to a string representation, which it then dumps into a file using the dump function. Pickling is the name for this method. Whereas, the process of recovering original Python objects from a stored text representation is known as unpickling.

4. How is Python interpreted?

5. How is memory managed in Python?

Memory management is handled via Python’s own heap space. All Python objects and data structures are stored in a private heap. This private heap, which is controlled by the Python interpreter, is not accessible to the programmer.

Allocating heap space for Python objects is handled by Python memory management. Programmers can use the core API to access some programming tools.

Python has a built-in garbage collector that recycles all unused memory, freeing it and making it available to the heap.

6. What are Python namespaces?

In Python, a namespace refers to the name that is assigned to each object. Variables and functions are the objects. Each object’s name and space (the address of the outer function in which the item is) are created as it is formed. The namespaces are stored in Python as a dictionary, with the namespace as the key and the object’s address as the value. In Python, there are four different types of namespaces:

7. What are decorators in Python?

8. What is the difference between a list and a tuple?

The difference between a list and a tuple is that a list can be mutated, whereas a tuple cannot. A Tuple can be hashed as a dictionary key, for example.

9. How are arguments passed by value or by reference?

In Python, everything is an object, and all variables are references to objects. The functions determine the reference values. As a result, you won’t be able to change the value of the references. If the objects are mutable, you can change them.

10. What built-in type does python provide?

11. What is slicing in Python?

Slicing is a technique for gaining access to specific bits of sequences such as lists, tuples, and strings. [start:end:step] is the slicing syntax. This step can also be skipped. When we type [start:end], we get a list of all the elements in the sequence from the beginning (inclusive) to the end-1 element. It means the ith element from the end if the start or end element is negative i. The step represents the jump or the number of components that must be skipped. If there is a list, for example, [1,2,3,4,5,6,7,8]. Then, by printing every second element, [-1:2:2] will return elements from the last to the third element. [8,6,4] is an example.

12. What are python modules? Name some commonly used built-in modules in Python?

Python modules are executable files that contain Python code. Functions, classes, and variables can all be used in this code. A Python module is a .py file that contains code that may be executed.

The following are some of the most often used built-in modules:

13. Is indentation required in python?

Indentation is required in Python. It designates a coding block. An indented block contains all of the code for loops, classes, functions, and so on. The most common method is to use four space characters. Your code will not execute correctly if it is not indented, and it will also throw errors.

A class’s instance or object is called Self. This is explicitly supplied as the first parameter in Python. However, in Java, where it is optional, this is not the case. With local variables, it’s easier to distinguish between a class’s methods and attributes.

In the init method, the self variable refers to the newly created object, whereas it relates to the object whose method was called in other methods.

15. What are negative indexes and why are they used?

In Python, the sequences are indexed and include both positive and negative numbers. The positive numbers utilize ‘0’ as the first index and ‘1’ as the second index, and the procedure continues in this manner.

I hope this set of Python Interview Questions will help you in your interview preparation. Best wishes!

If you are looking for Python developers for your next project, get in touch with us.

Also, if you have a question for us? Please let us know in the comments box, and we’ll get back to you as soon as possible.