ASP.NET vs PHP: Which One To Choose and Why For App Development? 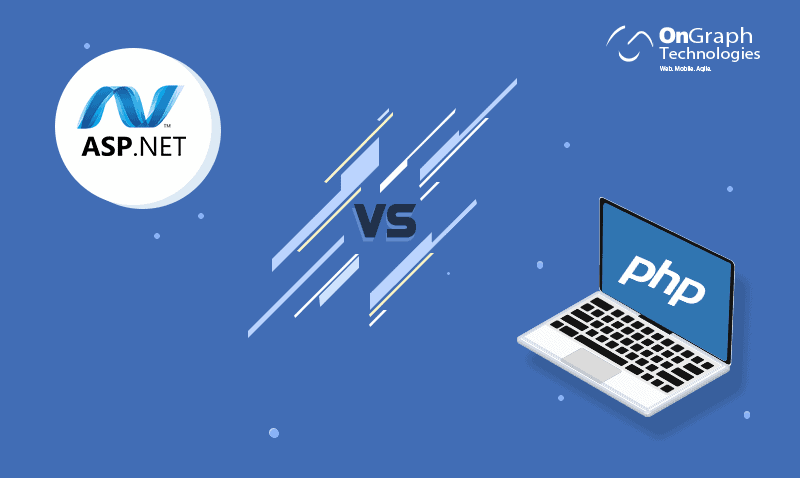 Businesses have no choice but to move to the online world. Even an entrepreneur today thinks of launching online first then setting up things in the offline space.

Even after receiving a bundle of updates, innovative libraries, and framework support, the debate for using ASP.NET vs PHP has not seen an end.

Both technologies have always emerged stronger and give a neck to neck competition to each other for the title ‘The Best’. So let’s not waste too much time here, and jump into the two dominating technologies and find which one is best to choose for app development.

But, first, understand both ASP.NET & PHP.

PHP has witnessed backlog since the beginning as it does not utilize a ‘managed code system’, thus considered less secure, however, it allows developers to be more creative while writing programs.

Using PHP, developers can design web elements in a unique way that is not dictated by the managed code system of the .NET family. Additionally, PHP is flexible due to being open source. It can run on any platform.

ASP.NET is a web development framework by Microsoft and typically uses C#. The framework requires developers to work by certain rules such as the managed code framework which governs the run-time of code execution.

When using ASP.NET, developers don’t enjoy a lot of freedom as they have to write an app with the “rule-based” nature of .NET. But allows them to use modules, which is sometimes forced by the managed code system, to work together. This, in turn, makes development, testing & deploying apps much more seamless and quicker.

Since developing robust sites utilizing the ASP.NET system, it does not require extensive code from scratch – and ASP.NET can be integrated with powerful Microsoft systems, such as Microsoft SharePoint for App Development, management, and deployment across the board – web development with the framework is often less resource-heavy.

As has been noted, ASP.NET Core, formerly known as ASP.NET VNext, allows cross-platform development as well, which mitigates the costly Windows licenses required for the .NET Framework and Microsoft Servers.

Both languages have their pros, they also have their fair share of cons

It’s easy to compare one language to another, but the debate never ends until businesses find the answer to “which one should I choose for the application development?”

Besides, ASP.Net and PHP have not seen a major drop in popularity and adoption.

However, if we compare the market share of ASP.NET and PHP, the latter leads the way with huge numbers to report. One such report shared by similar tech.

PHP even has better usage coverage in multiple website categories. Just look at the stats below image.

In a general way, PHP is leading the way whereas ASP.NET has miles to cover.

Here, it is important to understand how ASP.NET has made it to Stackoverflow’s survey list if PHP has this sort of popularity and adoption.

This is where we have to adopt a different method to differentiate between ASP.NET vs PHP.

As we mentioned earlier, PHP is a programming language whereas ASP.NET is a framework. Therefore, if we compare a framework to a framework i.e. ASP.NET to Laravel(it is the most advanced PHP powered framework today) we get completely different results.

Let’s take a look at Google Trends’ report below Over the past five years, PHP has been a more popular search term than C#.

C# is more widely used in NON-WEB applications than PHP, which is used as a general-purpose programming language. It is used for Windows phone apps, tools, and even cross-platform mobile frameworks (MONO).

C# is an object-oriented programming language whereas PHP is NOT.

Even with 31% growth, C# has attained 7th place in Stackoverflow 2019 survey and maintains a lead over PHP. Still, PHP is more popular and widely used over C#.

To decide which technology, however, is suitable for application development, businesses have to decide the purpose of the project.

Deciding on ASP.NET vs PHP for App Development?

There are several components that need to be considered to decide the tech stack for the website/application development. Almost every application/website requires to be scalable, quick in performance, provide security, ensure smooth functionality, look aesthetic, support seamless integrations and cost-effective.

Therefore, a company’s strategic plan should revolve around the following differentiation to align with the goals of the company.

However, a business must differentiate the two on the following parameters:

As we have seen, it is tough to differentiate between ASP.NET and PHP. Over time, PHP has received comprehensive community support. Thus, different frameworks and integrations are available to support it.

On the other hand, ASP.NET is a Microsoft product and is a standard framework that makes it popular among developers interested in building standard websites.

Then how would you decide which technology is best for their business?

To find the answer to that question, it is important to understand ‘Who will be in contact with your content?’ Both the technologies considered best to use the following:

Consideration between ASP.NET and PHP wouldn’t end until businesses shed light on the website whether it is client-facing or internally/business-facing. As mentioned on PHP’s official website, ‘PHP powers everything from your blog to the most popular websites in the world’.

PHP may benefit external websites more, whereas ASP.NET may better be left for business-facing websites/apps.

Let’s try to understand the importance of PHP and ASP.NET in security, optimization, performance, aesthetics, and functions. Also, understand how important these are for external and internal websites/apps.

PHP was originally innovated to enable more optimized and better-looking web page development. It comes with a set of tools that supports the developer’s creativity, thus a business gets better looking and better-performing websites.

Being so if we look closely, PHP is considered best to develop for more personal and business websites, including social media websites like Facebook uses PHP and refactored using HPHPi & HHVM.

PHP ensures the needs of externally-facing websites such as optimization, aesthetics, and performance.

When a website/app needs to be developed for a business within a corporation’s intranet, then security and functionality become crucial along with integration with enterprise IT systems.

Due to being a managed code system, ASP.NET shines in providing enterprise solutions. ASP.NET secures code at run-time, as the framework lets the developer build the website keeping functionality in mind. ASP.NET is widely used for web services development and mostly websites deployed on windows systems and/or IIS.

As ASP.NET is a Microsoft product itself, integration of other Microsoft services with it greatly increase the workflow efficiency, productivity, and management of company operations/projects.

Though ASP.NET is not a good choice to build end product appearance as appealing as PHP, it definitely should be your choice while developing an internally-facing website/app to make it secure and highly functional. It can help personnel with the required resources to complete daily workflows/projects.

We already know PHP is open-source and thus it is easy to declare it a winner when it comes to cost-effectiveness. ASP.NET is available for free to use, though for integration, hosting and other app requirements, Microsoft charges a fee for it.

Though, the fee charged by Microsoft is not high but when compared to free usage that PHP and its supportive technologies provide makes developers skeptical towards ASP.NET.

ASP.NET has cost included, it doesn’t, however, stop developers from building a website with Microsoft’s framework.

There are scenarios where PHP is the right choice while in other cases ASP.NET fits better. Before settling on the choice on which platform is progressively appropriate, you ought to ask the following things:

In the wake of responding to these basic questions, you ought to get a look at understanding which might be better for your business application.

It is very little either platform can’t achieve, henceforth you have to go a little deep to analyze the suitability of each language as opposed to their popularity.