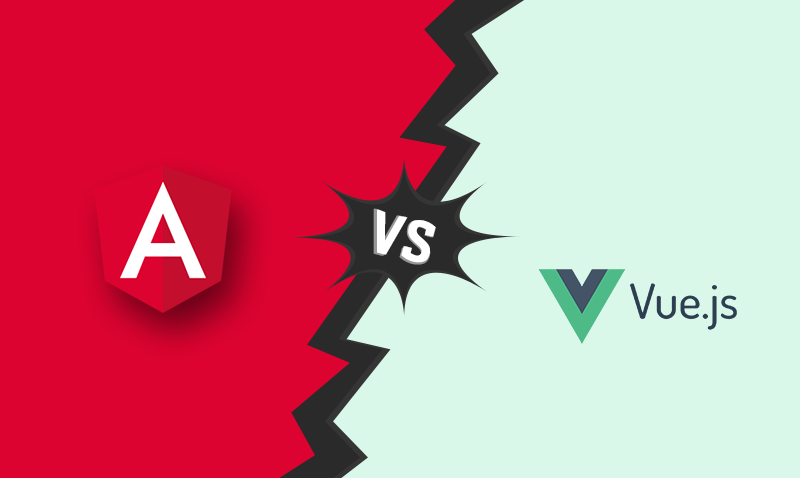 Although, this blog is about Angular vs Vue, but did you know Google used Vue.js in the development of one of its products?

Angular is Google’s javascript framework. Despite its vast popularity and use-cases, Vue made itself Google’s choice to build a reactive wrapper for the Google Charts library.

It is not the first time Vue, as the youngest javascript framework, surprised us.

Facebook is another user of Vue. Although technology is used for the marketing of its app, it is still a clear indication of Vue’s maturity. That can be a reason Vue has been successful in maintaining its popularity throughout the year besides Angular.

You don’t need to believe in my words. Just look at insight captured from Google Trends below Vue’s popularity from the past few years is worth noting down for both businesses as well as application development companies around the world. We already have Angular from Google and React from Facebook to develop exciting and SEO friendly websites and applications.

Angular and React, though, have established javascript frameworks for front-end development; however, Vue’s growing adoption in small as well as large application development is not something to ignore.

Where Vue and Angular Stands in 2019?

In the mid of the year, Stack Overflow came up with an early developers survey that curtains up from reality.

Vue.js occupied a second place as the most loved and highly wanted web frameworks in 2018-2019. Whereas, Angular manage to secure 9th place among the list of 12 web frameworks. There is a more exciting thing about the survey. Vue.js were nowhere in the list in the previous years (2017-2018) Stack Overflow Developer Survey. Have a look at 2018 survey results: Over a period of 12 months, Vue.js becomes the developer’s choice of javascript framework.

Undoubtedly, Vue.js has gained remarkable popularity as a javascript framework over Angular.js in past years. However, there is something else that tells a different story. According to the stack overflow survey, nearly 30% of developers are keen to use Angular in future projects, whereas developers interested in using Vue.js are just half that number.

We can understand, Vue’s popularity is growing significantly, but its use in the project is not as fast as Angular.

As 2019 proved to be a big year for Vue, let’s look at other stats and try to understand the future adoption of Angular vs. Vue.

According to Hackerrank, the number of developers who know Vue is likely to keep increasing in 2019. The company conducted a survey where more than 70,000 developers participated. As per the outcome, 26.92% of developers want to learn Angular in 2019. On the other hand, 24.70% of developers have shown their interest in learning Vue in 2019. The number of developers interested in learning Vue.js in 2019 is very close to Angular.js. Despite the fact that its adoption is less in projects in comparison to Angular, Vue.js popularity is leading its path forward.

Which JavaScript Framework is best to develop a Single Page Application?

Besides the popularity of these javascript frameworks, let’s dive deep into the key characteristics of Vue & Angular to draw out comparisons between Angular vs Vue and which one should be your next choice to build web applications.

Why Are Frameworks Important in Web Application Development?

A framework plays a crucial role in the application’s structure, performance as well as scalability.

Since front-end development fundamentally shapes the structure for the code libraries to work, application development companies pay utmost attention while requirement gathering to suggest the best tech-stack to clients.

Why & When should you choose Angular.js

Angular and Vue, both javascript frameworks provides a great structure to applications. However, the choice of using the framework completely depends upon all the factors you will consider while making the decision. If you want to go the standard app development way and looking for a well-trusted framework, Angular.js should be your choice.

However, if you are looking to develop a single-page layout and want it to be fast, light, and clean, Vue.js is the way to go.