SOAP Vs REST, Which API is More Secure? 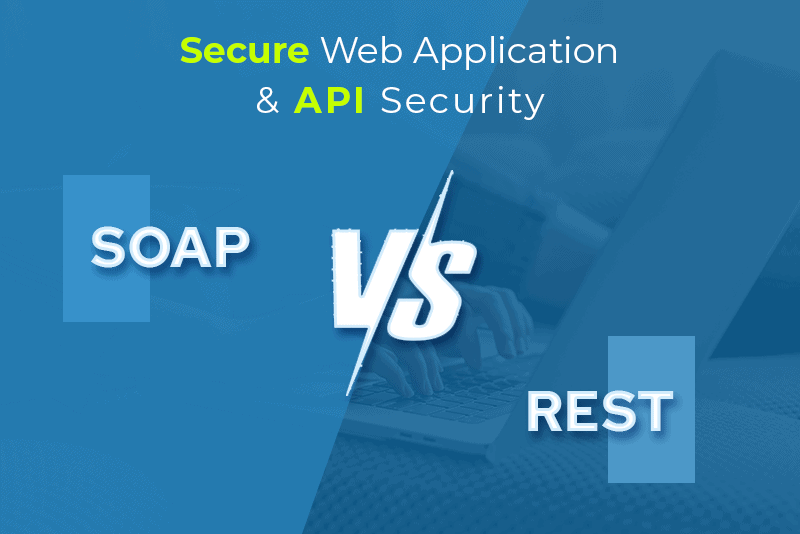 In a digital world, secure data exchange requires safe web applications and API security. The balance you move from your bank’s mobile app, the OTP you provide to you for retail transactions, the credential you hold and apply to numerous devices from various locations in order to access your online accounts—all of these things are possible due to an API and hence your API must be safe.

There are standards in place to protect the API, and these must be implemented during information transfers as well as when data is stored. But where are the standards for the surface area that APIs represent? You want your data to be accessible, but not the sensitive stuff, never to anybody. The front-line defense layer of an API is also known as its “guardian” function, and it has to be viewed as a major concern and specificity just like any other security risk.

In today’s world, there are two primary Web Service Formats. SOAP and REST are the most popular ones, with SOAP being widely adopted in organizations with high-end security as an API. However, because of its distinct format and semantics, the modern REST pattern is surpassing SOAP in terms of web services development. Both standards expose data using HTTP requests and responses, but they use various formats and meanings to accomplish it, resulting in different behaviors for security issues that you must be aware of.

The use of SOAP’s extensibility, which includes extensions for transnational messaging dealing with particular security issues, has revolutionized the way businesses communicate. SOAP has been around for a long time and is widely used in large enterprises. XML-Encryption, SAML token, and XML-Signature are just a few of the security technologies that have clamped down on data being received by and transmitted from a SOAP service.

On the other side, although REST does not include as many security patterns as SOAP, it nevertheless leaves security up to the application. Instead of assuming that something comes out of the box with REST, it is critical to focus on the amount of safety in code, deployment, and transmission.

SOAP is a better choice for standardizing and securing Web Services when you want to meet the following goals: When it comes to standardization and security, SOAP is generally regarded as a superior option for using Web Services. Both API formats offer a Secure Sockets Layer, which encrypts data during transit. However, so does WS-Security, which is a bonus for businesses.

REST and SOAP are two API protocols that work with a variety of data output types such as JSON, CSV, and XML. SOAP is restricted to XML, while REST may handle any data format. The use of REST for data transfer in JSON saves money on computer infrastructure expenses since the JSON format is easier to parse than XML.

Rest is more sophisticated, therefore when another endpoint requests an already completed query, the API development may take advantage of the data from the previous request. On the other hand, SOAP solutions must repeat the process for each query.

SOAP is the greatest option for projects with critical private information such as finances, banking, and others. You do not need to use SOAP while developing a mobile application that sends the day’s forecast because you don’t require additional security in this case.

What can we infer from the above comparison?

While it appears that SOAP has an overall advantage over REST, using a badly-designed SOAP API may be far more detrimental to an organization. The WS-ReliableMessaging standard provides built-in error handling for message failures via the SOAP protocol. In contrast, when a transfer fails in the middle, as with many other protocols, it must be resent.

API Testing for Security and Stability

APIs ensure that data is delivered on a regular basis while also assuring that users have the most up-to-date version of a code base. However, this also raises the risk of software failure or lax security. As a result, API testing is crucial for building a solid user base and ecosystem.

API testing differs from website or application testing in that it isn’t as reliant on the processing servers and systems that handle the heavy lifting. The core of API testing isn’t limited to the processing servers and systems that tackle huge tasks. Data storage, request processing, programming, and other factors can lead to incorrect response formatting, which the software would be unable to utilize.

When it comes to testing APIs, developers check to see whether the systems can handle all of the concurrent users who will be using them at once. Bottlenecks in the API might cause the service to function slowly, with unanticipated consequences for application performance, website speed, and client happiness. These issues can get worse when it’s impossible to tell which API endpoint is having problems.

Developers perform stress tests on APIs to ensure that they can support the anticipated number of simultaneous users. Bottlenecks in the API might cause it to respond slowly, and this may have a negative impact on service performance, website speed, and customer satisfaction. When it’s unclear which API endpoint is having issues, these problems get much worse.

You want your consumers to have an easy, seamless app user experience across all internet platforms. This is only possible if you pay attention to API security and the platform on which it can successfully handle all of the concurrent users attempting to access services at the same time. Any kind of API blockage might result in difficulties including sluggish response, sub-par performance, or incorrect results. When it’s uncertain which API endpoint is having issues, these problems can get worse.

Looking for expert advice? Get in touch with our team of specialists!