How Leveraging Flutter App Development can Scale Your Business

With Android exceeding the 100 thousand per month mark, scaling the business is getting more challenging. And it’s not just Android; around 30,000+ apps are on the list for iOS devices. Flutter is a one-in-all solution to all your business challenges and has also swiftly gained popularity in the last few years. Choosing Flutter app development helps you in multiple areas: 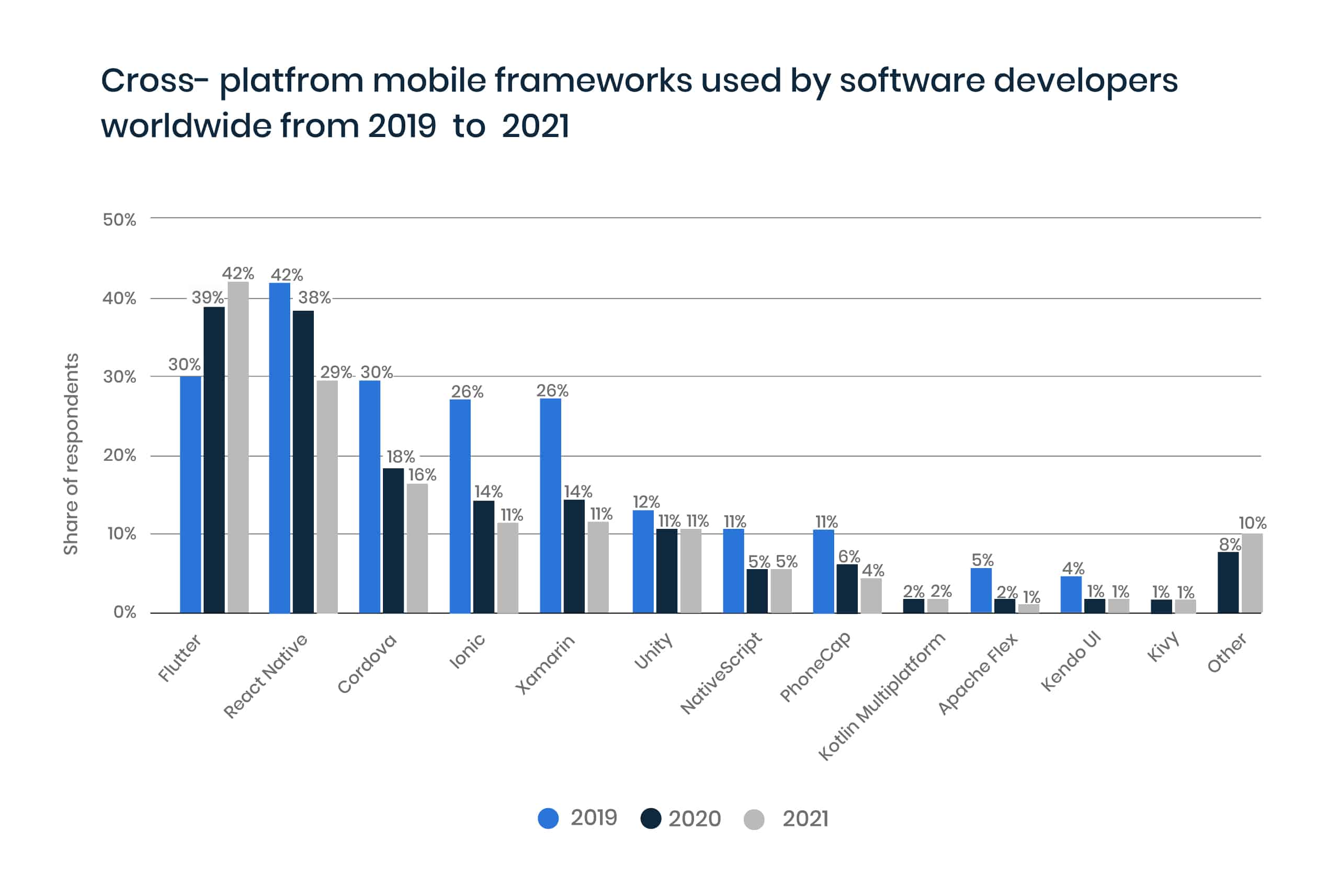 Let’s dive deeper and uncover why Flutter heeds the list.

In May 2017, Google developed an advanced framework with a single codebase to create high-quality, high-performance mobile applications for Android and iOS with flexible UI designs and named it Flutter.

Being a free and open-source platform, Flutter gained a massive user base and helped millions of developers all across the globe. Flutter is not just free but a simple, powerful, efficient, and easy-way-to-understand SDK that allows mobile application building in Google’s own language, Dart.

Technically, Flutter is not completely a framework but a comprehensive SDK that allows cross-platform app creation for various Operating Systems and offers different functionalities like rendering engine, testing and integration APIs, ready-made widgets, and command-line tools.

Flutter is divided into two segments:

The Three Architectural Layers of Flutter The three architectural layers or the three-tier architecture (N-tier) is one of the most popular architectures for developing applications and programs. These three layers of Flutter are-

Also known as the interaction layer, most developers associate with Flutter’s platform through this layer. The framework layer is also among the most modern frameworks available.

It is the second layer in the architecture where the flutter code is added to an existing or new app as a module or as the entire application’s content. The Embedder application framework can gain required services like accessibility, input, and rendering surfaces.

Moreover, embedder is created in a platform-specific language for iOS, Android, and macOS. For Android, it’s Java, and for macOS and iOS, it’s C++, Objective-C/Objective-C++.

It is the final layer in the architecture that manages network requests, output, and input. Flutter has Skia as its rendering engine, which reaches Flutter’s framework through Dart. Dart encapsulates the C++ code to Dart classes. Flutter Engine also handles rendering translation challenges in C/C++. Dart is under active development and is compiled into native machine code for building mobile apps and programs using modern tools. It is inspired by other popular programming languages like Java, JavaScript, and C#. You cannot execute code directly in Dart as it is a compiled language. The compiler parses it and transfers it into machine code for executing the code.

What is Flutter used for?

Fortunately, many answers to this question vary from user to user.

For developers, Flutter helps lower the entry bar for creating apps. It also helps reduce complications and fares and increases the speed of application production across different platforms. For designers, Flutter is a tool that provides amazing UI/UX. Flutter can turn concepts into production code without any compromises typical frameworks impose. After the recent update, CodePen support is added to share your ideas with fellow developers, making it a prolific tool

For tech support teams, engineering managers, and enterprises, Flutter enables the integration of application developers into one desktop, web, and mobile application team. This unification helps build branded apps for multiple platforms out of a single codebase. Also, development gets faster with Flutter synchronizing the releasing timetables through the user base.

Why Opt For Flutter App Development?

The most prominent reason why to opt for Flutter. The primary languages used are Kotlin, Objective C/Swift, and Java. Also, using these languages makes the overall development less expensive and fast, allowing code repetition.

In the past few years, Flutter has become famous among organizations and cross-platform tools like React Native, PhoneGap, and Xamarin.

Total Number of Apps: Over 25 Thousand

Here’s a list of reasons why one should choose Flutter over other application development frameworks:

At Flutter, you get readymade gadgets and syntax with fewer code lines. Shorter code makes bug fixing and updating more simple. Application takes less time to develop than other native languages and less time to roll out to the marketplace, which ultimately increases overall efficiency and development speed.

Flutter is an open-source app development framework that offers cross-platform app development. Both Android and iOS device applications can be built using Flutter.

Taking modern devices as the primary user platform is essential to compete in the current business race. But, Flutter builds applications that work seamlessly on both new and old devices.

Brand trust from Google is enough to ensure quality and modern functionalities.

Flutter highlights widgets as a constitutional unit to simplify application development. Widgets are simple building blocks of Flutter’s UI, where each widget is a fixed manifesto of the UI.

Based on composition, Widgets outline into different levels where every widget nests in the center of its parent and get context from the parent. This structure carries up to the root widget (the container hosting Flutter, like CupertinoApp or MaterialApp)

It helps to build a run of designed text in the program or your app.

These widgets enable the development of adaptable layouts in the vertical (Column) and horizontal (Row) directions.

This widget lets you place other widgets above the other in the paint order rather than following a linear orientation.

This is the most creative widget that allows you to build a rectangular perceptible element.

What Kind of Apps Can You Develop in Flutter?

Flutter is an open-source, cross-stage mobile application development framework for building local interfaces on Android and iOS. Presented by Google in 2017, Flutter works by wrapping a web view in a local application.

Besides its ability to fabricate applications with a native look and feel, this application development structure by Google is generally welcomed by engineers and ISVs for improvement.

Since Flutter works with developers to build cross-platform native apps with very little compromise, Flutter has been dependent on new companies and set-up brands. Here’s a recent usage statistics of the Flutter app development framework – Some benefits of Flutter app development are: Widgets are the most useful and innovative features that let you create interfaces through various building components. It offers different fonts, padding, and buttons. It also helps create different layouts and customization from basic to complex.

The accessibility of easy-to-understand documentation makes Flutter learning easy for beginners and gains admiration from developers. The other best part about Flutter learning is that it uses Dart, one of the simplest languages for app development. Availability of the Skia Libraries

Skia is a swift and dynamic open-source library with a strong backend. It redrafts the user interface, enabling the rapid load of the application at sixty frames per second. This makes the users like the seamlessness of the application more than any other frameworks available.

This feature got the most attention and praise from Flutter engineers worldwide. Yes, almost negligible reloading when making changes. Also, Flutter offers faster updates, testing, the introduction of newer features, and bug fixes.

Drawbacks are not like a deal-breaker, but they allow you to understand if it may not be the best choice for a project. Here are some drawbacks you may come across using Flutter.

Lack of Support for iOS Features

As Flutter is a Google product, the iOS application support quality suffers. If most Software Development Kit features and functions work perfectly on Android (primary devices), then there are a few problems with iOS.

Large file size because of the widgets

Flutter does not allow third-party libraries (majorly paid) for application development, so developers can only access certain functionality.

Moreover, searching for free libraries and packages with pre-tested functions is quite difficult.

Dart still lacks a wide community since a handful of developers use it for app development. This is why Dart programming language has a relatively smaller application development community than JavaScript.

Apps like Google Ads, Hamilton, and Alibaba’s Xianyu have distinctive and rich SDKs and are developed on Flutter. One of those prominent reasons why organizations use Flutter is because it helps apps expand faster.

Google Ads is smartly designed to show campaign statistics, budget updates, real-time bids, keyword tweaking, and live notifications. In its recent update, there’s an additional feature to reach a professional for any queries and suggestions. The attractive UI encourages users and also makes it easy to use.

Other examples of apps developed on Flutter are: Flutter app development enables organizations and developers to seamlessly create native-like apps without worrying about the strict budget plan. Flutter also stretches the user base by publishing the apps on Android and iOS stores.

Organizations mastering Objective C/Swift, Java, and Kotlin can directly move to Flutter as these are their primary languages. Further, it offers cross-platform toolkits like React Native, PhoneGap, and Xamarin for application development.

At OnGraph Technologies, we have about 250+ hand-picked top developers with expertise in various technologies and tech stacks. We provide the best resources for Flutter App Development and have created multiple Flutter applications despite the brief existence of this emerging technology.

You can schedule a consultation with us if you’d wish to realize an App idea and discuss Flutter’s benefits and cross-platform app development.

A software engineer with a deep interest in writing blogs and web content on various tech stacks.