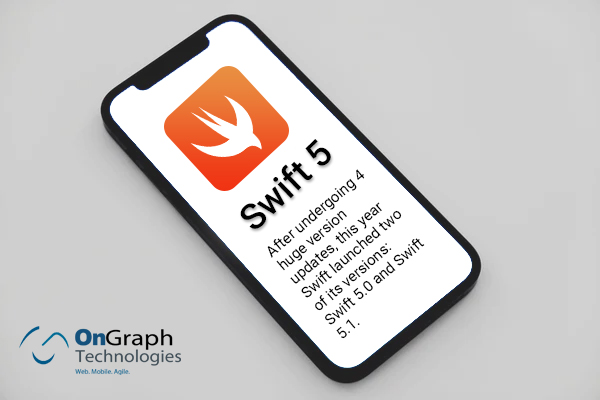 Swift is where Java was in its early days, today. Java was updated numerous times since it was created, in order to transition the language into one that added stability and performance to the Android domain.

Swift, too, is in the midst of upgrades to ensure that it may support exclusive and complicated programs.

As per Stack Overflow’s 2019 Developer Survey, Swift was voted as the 6th most preferred programming language by about 90,000 developers.

After undergoing 4 huge version updates, this year Swift launched two of its versions: Swift 5.0 and Swift 5.1.

Both of these versions of Swift have brought some remarkable features that can play a crucial role in language adoption.

Let’s take a look at the attributes of both of these Swift versions. Later on, we’ll dive into the special features of Swift 5 that make it a perfect choice for iOS app development companies.

The Swift 5 update is one of the most significant milestones in the language’s history. Other than ABI stability, the runtime has now been added to both previous and future Apple operating systems, including iOS, watchOS, tvOS, and macOS. The latest version of Swift 5 includes new capabilities that are the foundation of Apple’s goals.

Here are some of the features of Swift 5:

The most notable feature of Swift 5 is its stability ABI (Application Binary Interface). The phrase API, which stands for Application Programming Interface, refers to a binary version of an API. APIs are used by iOS app developers to create their apps’ code.

For instance, API uses the UIKit framework to interface with labels, buttons, and view controllers.

If you’re developing a mobile app with ABI, the user won’t have to download all of the code your application needs while downloading and installing it. The majority of those codes will already be on their iPhone as part of iOS, its libraries, and frameworks. Your app only needs to utilize the binary code that is currently there, resulting in future apps being smaller and easier to create.

The standard library of Swift 5 comes with the below-mentioned set of features:

-Reimplementation of the string with the UTF-8 encoding that leads to faster code.

-Raw texts have better support in the string literals.

-Incorporation of the SIMD vector and Result types.

-Enhanced performance in Set and Directory.

-Improvement in String implementation that results in flexibility for building text from data.

The most significant updates in Swift 5 involve updated deployment targets, target-specific build settings, dependency mirroring, and more. Furthermore, one may now import libraries in a REPL without having to create an executable using the Swift run command.

Exclusivity Enforcement is now included in Swift 5, for both debug and release versions. It also allows dynamic callable types to interoperate more effectively with languages such as Python, Ruby, and JavaScript.

Other language proposals that Swift 5 implements are as follows:

-Supporting ‘less than’ operator in the compilation conditions

Extensions to the Swift 5.0 core, such as stable module and recent improvements that enhance the language’s capability, as well as standard library features such as property wrappers, diffing for appropriate collection types, opaque result types, new APIs for String, and more help to extend its stability.

Below are some of the stand out features of Swift 5.1:

Swift 5.1 enables the use of binary framework technology, which is possible because of Swift 5.1’s enhanced module stability support. As a consequence, iOS app development becomes incredibly simple and quick for developers.

It creates a new text-based module interface file that defines the binary framework API, allowing it to be compiled with various versions of the compiler.

The OSS toolchain packages of Swift 5.1 for macOS and Ubuntu include binaries for the SourceKit-LSP, which is basically an implementation of LSP for Swift and C-based languages.

The standard library of Swift 5.1 introduced the below mentioned new features, which makes it quite easy to understand how to build apps with Swift 5:

-Enhanced flexibility for the initialization of an array.

-Support for updating as well as handling diffs on the collection of appropriate types.

-APIs to work with Strings – constructing and handling contiguous strings, general initializers for Range and String.index, and helper for working with Unicode text.

-Use of Self for value types and classes.

-No need for the return keyword for single expression getters or functions.

-Synthesis of default values by the compiler for the properties with default initializers.

Why Swift 5.0 for Businesses?

Let’s discuss some of the benefits of Swift 5 features for the businesses:

Swift 5 leads to binary compatibility of the language. This means that the apps developed using Swift 5 would be significantly smaller for the following operating systems – iOS 12.2, macOS 10.14.4, tvOS 12.2, and watchOS 5.2.

This is another incomparable advantage of Swift 5. Since every dynamic library used in the application which amplifies the launch time will be cached in the memory and can be shared among the apps.

No user likes a broken application. The app freeze and glitches are the major reason behind the app uninstallation rate, which must be avoided by every business. The stable ABI of Swift 5 helps apps to perform better and offer greater performance.

Swift 5 with its latest features introduces lightweight syntax and collaborates robust type interference and pattern matching. This new version allows Swift developers to not only improve the readability of the code during the development of an iOS app but also express complex ideas in a clear and concise manner.

If you’re interested in releasing a new iOS app as quickly as possible, consider creating it with Swift 5. In the event that you have any questions regarding Swift programming or iOS app development, get in touch with our team now!