Ruby on Rails vs Django – Which is the better framework for your web application? 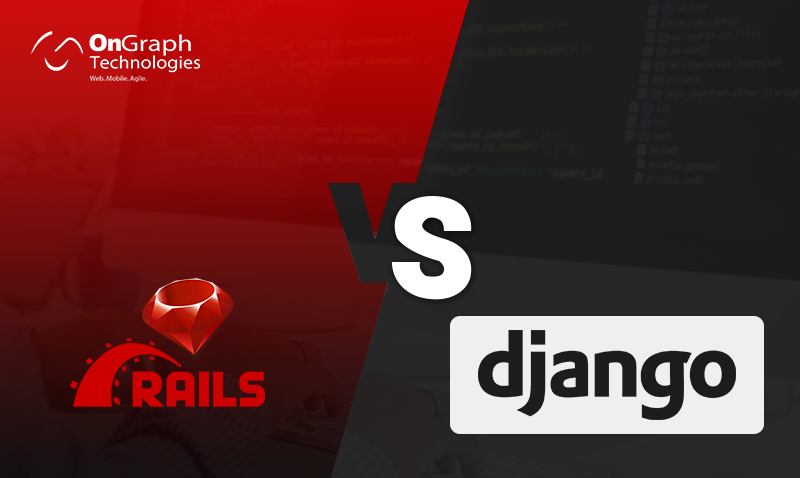 In the programming world, there are a number of web application development frameworks available. However, we can say that out of all, Ruby on Rails and Django are two of the most popular frameworks for web application development. Both of these are entirely open-source, allow for rapid development of web applications, and boast support from a broad community of developers. The popularity of the two technologies is expected to even continue to 2020. But the question is how to choose between the two – Ruby on Rails vs Django?

The speed and performance differences between Ruby on Rails and Django are negligible, with immensely popular services developed on each framework. While Ruby on Rails is powering 387,696 websites out there on the web, Django supports 74,405 websites. Both of the frameworks are free to use and are used not only to deliver only a website but also all the hidden machinery behind, supporting the web-based apps that power various businesses such as e-commerce sites and various SaaS solutions.

In Spite of sharing all these and many more similarities, both frameworks differ significantly. Here, we will explore the various similarities, pros and cons of these two significant technologies and then make out the detailed comparison between Ruby on Rails vs Django. But first, let us try to understand what these two technologies are all about…

Django, which is a Python-based web framework, was released in 2005. It is a prime choice for Python app development. Django is an open-source, general-purpose and free framework which is easily accessible and all this makes it so popular. Developers all over highly praise the features of Django which was initially designed with the purpose to simplify the process of building complex and database-driven websites. Django encourages rapid development with a pragmatic and neat design.

What is Ruby on Rails?

Acronymed as ROR, Ruby on Rails is written under MIT License. It is an open-source, server-side web app framework. Rails being a model-view-controller provides great default structures for a database, pages, and web services. Developers consider it as a time-saving method to write code.

Ruby on Rails framework majorly works on two principles – DRY (Don’t Repeat Yourself) and Convention Over Configuration. While the former is self-explanatory and eliminates the need to do the same task of coding over and over again, the latter implies that the environment you work in, such as languages, systems, libraries and more, allows numerous logical situations by default. This means that instead of building your own rules each time, one can adapt to them, making the entire programming process a whole lot easier.

Pros of Ruby on Rails

Cons of Ruby on Rails

Why Compare Ruby on Rails vs Django?

In Spite of the various differences in the approaches to solve popular problems and the programming paradigms, both the frameworks are good at similar appliances. Both are object-oriented, dynamically-typed and offer persistent support. Both are fast, open-source and support powerful internet apps.

So, what are those differences between the two frameworks that actually make a difference? Let’s find out…

Major Differences Between Ruby on Rails vs Django

Django makes use of Python, while Rails, which was released back in 1995, is developed using Ruby. Ruby is known for its qualities such as equality, flexibility and its understandable syntax. Whereas, Python is one of the top programming languages and is known for highlighting the code’s readability as well as simplicity.

Ruby has been designed to enjoy writing the language and so is essentially enjoyable. Though the applications built using either of them will appear and function the same, you can see the main difference under the covers.

There is one aspect which both of these web application development frameworks have in common is that both have adopted MVC (Model-View-Controller) architecture. Although, it is known as MVT (Model-View-Template) for Django. For the most part, both MVC and MVT are similar and differ ever so slightly.

In ROR, the Model represents the data of the database such as pictures, posts, comments, etc. all of which is taken care of by ActiveRecord. The View here covers the data in the HTML template and later sends it to the controller, which is then handled by ActiveView. Now, the ActionController connects Model and View and manages requests while also taking care of sending responses to the web browser.

In Django, the Model denotes the database describing the data structure. View is the Regular Expression-based URL Dispatcher which handles what the users are supposed to see. Here, the Template indicates a web templating system that merges with DLT (Django Template Language). The controller part is managed by Django itself.

Both Ruby on Rails and Django are web-oriented frameworks which are designed to deliver the high-class experience. Both of these frameworks enable companies to develop fabulous websites and enrich them with several plugins and add-ons.

With both of the frameworks being well-built and mature, picking one out of Ruby on Rails vs Django is hard. The key lies in the coder’s skills.

When comparing the performance of the two frameworks, both do a decent job and it is almost impossible to decide the winner. Both of the frameworks leverage modern programming languages as well as deliver the tools to optimize the code.

The differences can be witnessed depending on the app which is to be delivered. When it comes to developing a general purpose app for e-commerce or a similar project, Ruby on Rails shines. On the contrary, Django uses the versatility of Python to develop a better-performing specific-use app.

In the battle of Ruby on Rails vs Django, it is seen that Rails is faster by 0.7%. This majorly because it has the benefit of a rich repository of great libraries and plugins to improve the speed and thus the performance of the framework.

Nonetheless, Django equally encourages the fast development process and is an outstanding choice for a web framework.

For creation, stability and innovation run parallely. Ruby on Rails can juggle both as it enables users to reuse the code so as to eliminate dependencies. It also leverages the Configuration Convention technique, which frees coders from further efforts.

On the contrary, by adhering to any proven method to solve the problems, Python follows a more conventional approach, thus providing stability.

When it comes to delivering web apps and online systems, Ruby on Rails developers have a clear dominance. Thus, there’s a prospering community that provides support to the new users and provides them with helpful suggestions on problem-solving.

Django, in itself, is a significantly less popular framework. Thus, the possibility of encountering the previously unknown problem is quite bigger. Whereas, the popularity of Python is climbing up day-by-day. Python is a kind of jack-of-all-trades language and finds appliances in backend, machine-learning and web development. Ruby is more web-oriented and hence the community is more monolithic, polished, mastered and focused on a particular use case.

The same thing, however, cannot be said about Ruby on Rails. You first need to understand what Gems and bundles are, as they are required to install the packages for Ruby. Firstly, these two are installed and then run Command Gem Install Rails so as to finally install the latest version of the Rails framework.

Both of the teams responsible for the development of a framework did a wonderful job to prepare the documentation for the projects that they deliver. The language is legible and straightforward, having no riddles hidden within and the interfaces are plain to read.

Hence, when it comes to documentation, there’s no real difference.

Ruby on Rails was born in 2004 and since then, it is massively adopted in the web development community. There are thousands of websites all over the internet leveraging the flexibility and power of this framework. The technology is also regularly updated.

Django came to life in 2005, with the latest version launched in April 2019. The framework has proved itself number of times and the best proof of its reliability is the very fact that it is being compared to Ruby on Rails on equal rights.

In the comparison of Ruby on Rails vs Django, the security factor is an important part of any website or application.

Certainly, Django has won this functionality from Python. NASA also makes use of Django frameworks, which itself proves its stability. While Rails is backed by active files, Django is backed by middleware’s. Django has tools so as to provide protection to the Django app from SQL injection, cross-site (XSS) scripting, and much more.

All in all, both of the technologies for web development are reliable and can be trusted for security.

Although the Django technology has inherited scalability from Python, it still lags behind as compared to Rails. It has better scalability as a result of its attributes like freedom and flexibility of code. Both of these web development frameworks are heavyweight and are designed keeping scalability into consideration. However, ROR here has a clear win.

Summary – Ruby on Rails vs Django

Choose the right tool to achieve the best result.

Both of the frameworks – ROR and Django are amazing and deliver superior performance when they are used in the right manner. The key lies in understanding when to use each one of these.

When to use Ruby on Rails?

ROR automates the process of coding and thus makes the coder’s job much simpler. The framework works best when:

When it comes to delivering a project which is not reinventing the wheel, ROR works great. When the client requires a reliable framework to deliver the app to power internal business processes or to support the e-commerce system, Ruby acts as a much better pick.

Though ROR is amazing when it comes to supporting the project which will change the world breaking all the rules, its monolithic architecture can prove to be too outdated and heavy to power up something smaller.

ROR leverages a rich library of plugins as well as a richer community of programmers. Hence, the possibility of delivering the project with less effort and faster with high quality is much more.

When to use Django?

Django uses the flexibility of Python and relies on the experience of the coder’s and their responsibility for the project. It works best when:

Django is undoubtedly a better choice when the client needs to deliver the new social network.

The app will be sinfully complicated. Delivering the system performing complex data operations and focusing on being a monolithic multitool behemoth is better when developed with Django.

Taking into consideration all of the factors discussed above, we can say that for most of the time, Ruby on Rails proves to be a better choice as it enables a faster delivery for a smaller scale project, with numerous solutions ready to go.

If you need more insight into Ruby on Rails vs Django on a personal front, then you can simply connect with us. Our team will respond to your query very soon with the right solution.