ReactJs Vs React Native: Which One to Opt in 2021- A Detailed Guide 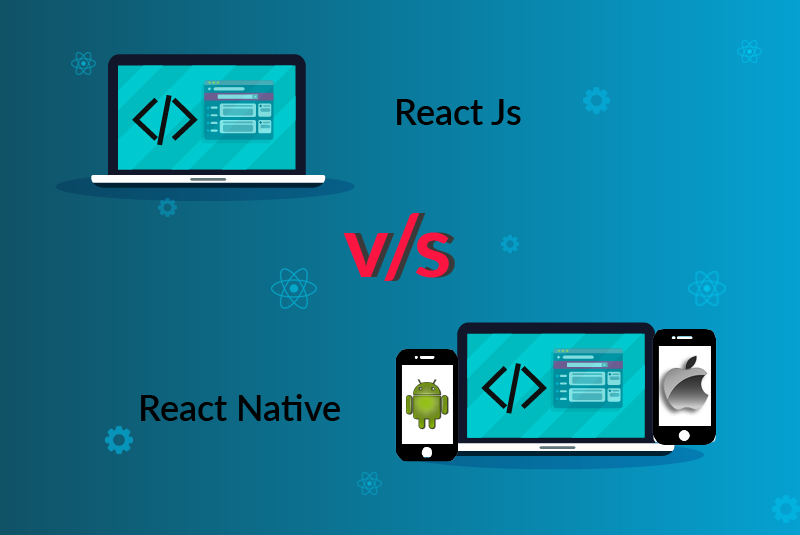 ReactJS and React Native are two exceptionally popular technologies when it comes to the app development industry. Both these tools are launched by Facebook, have similar names, and have maintained their fan base since their initial release. However, many are still confused between the two. Of course, it is very clear that one is a mobile framework while the other is a web framework. Apart from this, how are these tools different? Here, in this blog we will go through the pros and cons of both the platforms and will outline the differences when choosing between React Native vs ReactJS.

ReactJS is an open-source JavaScript library which is used to create the user interface for Web Applications. The tool is responsible only for the application’s view layer. It enables developers to build UIs from a small and isolated piece of code known as “components”. ReactJS is composed of two parts – First is Components which are pieces containing HTML code and what you wish to see in the user interface, and Second is HTML document where all the components are rendered.

ReactJS was developed by Jordan Walke, who was a software engineer at Facebook. Originally, it was developed and maintained by Facebook and later was used in its products such as Whatsapp and Instagram.

Facebook developed ReactJS for the newsfeed section in 2011, but released it to the public in May 2013.

All About React Native

React Native was developed in 2013 by Facebook for its internal project Hackathon. Facebook announced in March 2015 that React Native is open and available on GitHub.

React Native originally was developed for the iOS application. However, today it also supports the Android operating system.

Let’s have a brief look at The History…

Before diving into the comparison of ReactJS vs React Native, let’s have a bird’s eye view at the small history of both of the technologies.

ReactJS and React Native presently are powering some of the most widely used and popular mobile apps and websites. These carry an interesting history:

Facebook ads in 2011 were expanding and bringing in exciting, newer features. It is at that time that the engineering team had this realization that the constant updates were slowing down their progress. Content cascading changes as well as updates forced the developers to realign the complete application. With the increase in the team size, the problems also grew in the same proportion.

Although they had the right model, the user-interface required a revolution.

Jordan Walke, an engineer at Facebook, at the same time used XHP (an HTML component library for PHP) to build FaxJS, the first prototype of ReactJS.

ReactJS was deployed for the timeline of Facebook in 2011 which was a big leap.

In the same year, Mark Zukerberg said as quoted:

“The biggest mistake we made as a company was betting too much on HTML as opposed to native”.

This manifested the development of React Native as a framework. Soon, the developer world witnessed the great emergence of two most popular technologies. ReactJS vs React Native is an enthralling comparison which forces developers to think hard into their application and usefulness for building mobile apps, web apps, mobile responsive websites, and much more.

Before developing an app, one needs to make sure that they have all the necessary resources.

Before working on an application, setup is the initial step that one is likely to carry. So, the very first step to do here is Importing libraries.

Getting the required files from libraries is the foremost step. Bundling would be the next step, which implies the imported files will be clubbed into one single package.

So, here React Native wins as Setup and Bundling are very easy in comparison to ReactJS.

Who wouldn’t wish their app or website to appear attractive and presentable to the users? It surely helps to enhance the appeal of the app. Isn’t it? Integrating DOM is the ideal way to go when it comes to web apps.

So, here React Native emerges as the clear winner.

As already discussed, making your app look appealing is important. One can achieve this by making use of animations and gestures. At some point in time, we all have used CSS animations. However, React Native provides a more efficient way to include desired animations.

React Native makes developing and designing apps for both Android and iOS much easier.

Would you like to use an app that has confusing navigation? Definitely not! While developing an app, one must make sure it is easy for the users to navigate the various features that are integrated with it.

So, ReactJS comes up as the winner here.

One can safely say that the feasibility of ReactJS is high. This is because of the fact that it makes use of a combination of web development and JavaScript technologies.

After creating the platform-specific code, publishing them is the next step. Publishing an application relies completely on the platform that you have developed it for.

In the battle of ReactJS vs React Native, ReactJS wins here.

The more the capability, the more efficient an app would be! ReactJS and React Native focus on the recent SEO trend that gives them the title of being more capable.

So, here comes the tie.

Although React Native makes use of the same design as ReactJS, it is more preferred over ReactJS due to app development ease. It can steadily combine the components and translate the same into native code, thus enabling the apps to reflect native-like features.

Having said that, both ReactJS and React Native offer flexible functionalities and are also evolving with time. Both complement each other. However, the two have a slightly different implementation.

The choice between ReactJS vs React Native is challenging, though, you can connect with an app development company and discuss your project goals. They would help you in a more efficient way to decide which platform you should go for as per the scalability of your application. While you choose between the two amazing technologies, we expect you to make a wise and smart move. Best of luck and have a happy reading!