React js vs Node js: Which framework to choose for your next web application? 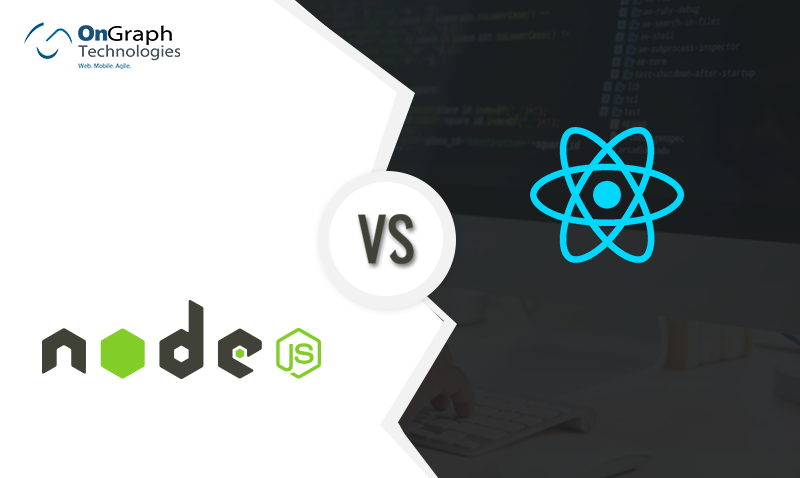 Brendan Eich, a Netscape Communications Corporation programmer, created JavaScript in September 1995. It started out as Mocha, then became LiveScript, and then became JavaScript. Its global adoption in an alarmingly short period of time made it World’s most used programming language. It is a paradigm shift in the programming world.

To cope up with the lacking areas of JavaScript such as Client-side security, Browser-support, and sometimes Performance, JavaScript Frameworks were created. Frameworks help developers with some of the heavy lifting.

If we look into the frontend development, we realize that the advent of 333333 has changed the scenario. JavaScript frameworks are emerging as quickly as possible, concluding that today we have constantly updated versions of Angular js, Node js, Vue js and React js .

React js is more of a JavaScript library than a framework that is developed and maintained by Facebook. Initially released in May 2013, it is a tool for building UI components. React js has an MVC or Model View Controller architecture. Facebook introduced it proposing to solve rendering issues of massive datasets in the JavaScript framework. React js is a declarative, efficient, and flexible JavaScript library that is used for building user interfaces. A react js application is made of multiple components, each responsible for providing a small, reusable piece of HTML.

Here is how React js works:

Instead of manipulating the browser’s DOM directly, React js creates a virtual DOM in memory, where it does all the necessary manipulating, before making the changes in the browser DOM.

React js finds out what changes have been made, and changes only what needs to be changed.

You will learn the various aspects of how React js does this in the rest of this tutorial. Node js is an open-source Google Chrome v8 JavaScript framework. The main idea of developing applications in Node js is to execute JavaScript on the server-side.

Node js is used to simplify and streamline the development of complex applications. Node js creates multiple types of applications such as command-line interface, real-time chat application, REST API, web applications, etc. Node js technology is used to build the back-end of applications with JavaScript. This JavaScript framework is lightweight and effective because it uses event-driven and non-blocking I/O models. This framework is used by developers for hosting APIs, serving HTTP requests, and accessing the database.

Here is how Node js handles a file request:

Node js dismisses the waiting and simply resumes with the next request. React js has an easier learning curve compared to others for, developers don’t need to spend a lot of time re-learning the programming language. In other words, React js is built on what developers already know– JavaScript. Thanks to its simple design, use of JSX (an HTML-like-syntax), and extremely accurate documentation React js is the best library that makes web development easier to execute and iterate.

In contrast, the Node js may be easy to learn, but it takes more effort to implement web applications with it. What makes it difficult is the asynchronous programming that executes the non-blocking code. However, this does not stop the implementation of a piece of code. That’s why, sometimes, it is difficult to program.

Microservices architecture is an entirely new approach to revolutionize scalable backends. According to the definition: It’s an approach to develop a single page app as a suite of small services, each running its process and communicating with lightweight mechanisms, often an HTTP resource API. The main idea was to allow different teams to work efficiently on separate features of a web app. Such an approach increases developers’ productivity and decreases time-to-market.

Let’s compare how this approach can be used with Node js and React js:

The concept of micro frontends introduces a way to disintegrate a scalable frontend into smaller and more manageable chunks. Over time, a separate team of developers work on these chunks until the code is ready to be deployable assets of loosely coupled applications. Moreover, each team is then responsible for a separate set that primarily serves different content. Micro frontends in React js are a more friendly and less bulky team.

For instance, an eCommerce platform built with React js can be divided into different sets of features that can be handled by separate teams such as the shopping, frontend, DevOps, and backend team (microservices).

In more advanced stages, the teams can be divided at a deeper level.

Node js truly complements microservices since both as a tech stack enables organizations to achieve agility, security, and superior performance. Using microservices with Node js allows you to develop apps without complexities. This powerful combination can also power highly-scalable apps and handle thousands of concurrent requests without slowing down the system.

By switching to a microservices architecture pattern, Cadenza got an opportunity to integrate several features of their app into independent services. It also eliminates long-term commitment to any tech stack. What’s more, it also helped them to cut down the huge costs. Likewise, eBay also moved to the microservice architecture and scaled beyond 1 billion users.

For your developer to work efficiently on a project, it is essential to have vast community support around the framework.

Founded and maintained by Facebook, React js is undeniably backed by a huge team, which regularly supports it. The best thing about it is its frequent updates that make developers work efficiently without breaking the application. This way, developers can be continuous learners. Popular websites like Netflix, Airbnb, PayPal, Uber, Khan Academy, and Asana use React js in their production.

Like React js, Node js is also an open-source that means its community are actively engaged in improving the languages and fixing bugs. A large community means a lot of developers have the best tips and tricks at their disposal when they communicate around the community.

The app size and performance are two aspects that drastically impact the quality of your web app, having a direct effect on the load and response times. Thus, it impacts customer satisfaction with web apps. Let’s compare how React js and Node js stand against each other in terms of performance aspects:

According to Node js 2018 user survey, Node js is continuing to have a positive impact on many users due to increased productivity and satisfaction, reduced development costs, and increased app performance.

Here’re some reasons that make it a robust backend and highly performing:

PayPal is one of the biggest examples of companies that benefited the most in terms of performance by using Node js. The company said that after migrating to Node js, they experienced a 35% decrease in the average response time, and their pages served 200ms faster. One major factor that improves Node js performance is its event-driven architecture. We’ve talked about it in-depth in our previous blog on Node js for eCommerce.

Both React js and Node js are used by many companies and have several clients like Netflix, Airbnb, Uber, and PayPal. Often, Node js and React js are used in conjunction to build web apps that support real-time updates.

Being a frontend library, React js is best suited for Single page applications.

Since React js is best-suited for single-page apps, choosing it alone for large or complex apps might be an overkill. For building complex apps, using React js with another tech-stack is mandatory as React js only caters to an application UI.

A packaged compilation of Google’s V8 JavaScript engine, Node js, is a core library, which is primarily written in JavaScript. Taking into the account of advantages of Node js such as its rich ecosystem and asynchronous non-blocking I/O, we’ve compiled a list of the use cases of Node js:

Both Node js vs React js are modern technologies applied by many successful businesses. You can use both technologies for your web app. You can create the front-end of the web app with React js and back-end with Node js, as Netflix did.