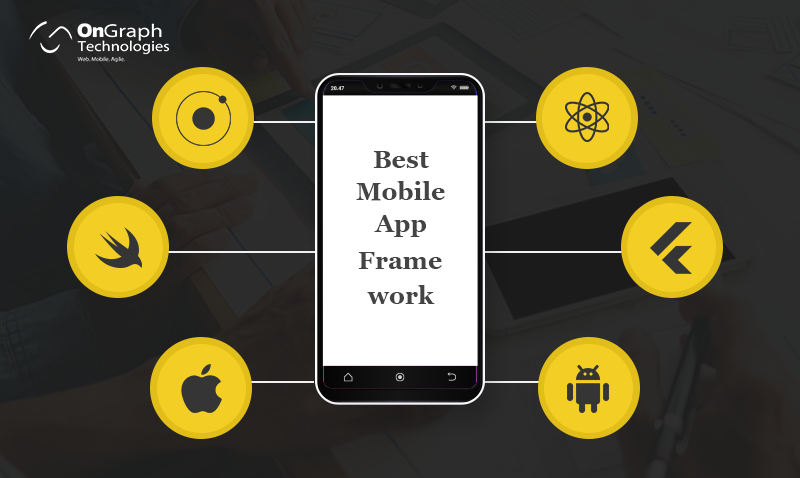 Mobile application development seems simple but is actually quite challenging. Deciding and choosing app features, layout, design, platform etc. is not only confusing but also complex to a large extent.

However, with the selection of the right technology, framework, and development team, you can overcome the challenges you might face during the app development process.

Choosing the best mobile app development framework not only helps you in defining the right features but also assists you in making your app distinct from others available in the market. Different frameworks have different features, but the question is how do we choose the best framework out of a plethora of options.

First of all, you need to ask certain questions to yourself before starting your framework search such as:

Once you have reflected on the above-listed questions, and you have a high-level understanding about your app and development requirements, it’s time to choose the best mobile app framework.

Here are certain factors based on which you can decide which framework to choose for your next app development project.

What is a programming language?

A programming language is a set of grammatical rules for instructing a computing device to perform specific tasks. These languages are important because they allow programmers to effectively communicate between all the components of an app. Programming can be defined as the actual syntax and grammar of writing code, whereas, frameworks are the cohesive sets of library codes that simplify programming in any given language.

It is crucial to choose a user interface that helps in building easy to navigate apps and allows users to quickly solve their query in the least number of interactions. A theme, on the other hand, is a design element that is carried out through each and every screen of the application and enhances the experience throughout a user’s app journey.

UI and themes collectively provide clarity on using the app. When users can see all the functions and locate the action buttons easily, it means the user interface is working excellent.

So, make sure to choose the right framework based on your needs:

While choosing a framework, make it a point to understand how fast and responsive it is. The reason being your app speed will entirely depend on the framework you choose for development. Frameworks are responsible to give your app an exciting, appealing and responsive design.

Talking about fast and responsive app doesn’t just mean that the app pages load faster and it is accessible from any screen size, but also how your app navigates and takes the user to the desired next step.

Most of the time developers overlook one of the most crucial factors while choosing the right framework, the community support!

Why is it important?

A framework that has a well-established community of developers is likely to have more potential as compared to the ones with a smaller community. The larger community will have more benefits. Your issues will be heard more frequently and will be resolved quickly.

Documentation might not seem like an important factor for your app development but is important while choosing a framework to make sure that it is open for the upgrades and modification possibilities needed for your application in the future.

The documentation gives you detailed information about the framework and its development potential that you can leverage to develop a cutting edge mobile app.

Mobile App Development Frameworks you can Choose From

The choice of framework entirely depends on the type of app you’re developing and the features you require. So let us understand which framework offers what.

Hybrid frameworks are more in-demand these days. The reason being they let you create apps for various platforms such as Android, iOS, and Windows. Code sharing and quicker development are some of the reasons for using hybrid frameworks.

Ionic is the most widely-used mobile app framework. It is used to build beautiful open-source front ends using web technologies like HTML5, CSS, and JavaScript. This client-side framework also supports the latest mobile devices to prepare a robust ground for the mobile app before it’s finally launched in the market. Ionic also works best with the powerful Software Development Kit such as Angular.

Apache Cordova is one of the best mobile app frameworks which enables programmers to build mobile applications using advanced and most reliable technologies like HTML5, CSS3, and JavaScript. Due to these technologies, the framework can be used to build apps that can run on any mobile device. The framework also consists of some built-in components which make development quite easier.

Flutter is an open-source mobile UI framework by Google. Flutter is the fastest way to develop hybrid apps. The framework used C, C++, Dart and Skia Graphics Engine to build incomparable visuals. Flutter stands out for the ease of working with existing code and for being the only framework with mobile SDK to provide reactive styles without having to use any Javascript bridge.

Cross-platform frameworks use a native rendering engine. The codebase is written in javascript and connects to the native components through bridges and provides a user experience quite similar to native.

The software giant Microsoft introduced Xamarin which can only be used by the developers who have experience in C# codebase. You can build apps for various platforms using Xamarin such as Android, iOS, and Windows. The codes written in Xamarin can easily be shared with the help of Windows and Mac OS. Since it allows code sharing, it saves developers a lot of time.

React native is the most popular native cross-platform framework. Using React, you can build large-scale apps in less time. Developers get the freedom to replace the web-specific features with mobile-specific features. One of the best examples of an app that is built using react Native is Facebook.

The native script is an open-source framework and is known to be the best framework due to its large community support. The languages used by this framework are JavaScript and Typescript. NativeScript also features deep integration with modern Angular along with full-stack features like code generation, router support, Angular CLI, and webpack.

These frameworks are platform-specific and can only be used to build applications meant for dedicated platforms be it Android or iOS.

Cocoa Touch is the app development environment for building software programs that run specifically on iOS. It uses Swift which is a general-purpose, multi-paradigm, complied programing language specifically for WatchOS, iPadOS, macOS, tvOS, and Linux. Swift is designed to work with Apple’s Cocoa Touch frameworks. It is an amazing framework using which you can develop high-performing applications for iOS.

Every hybrid framework can be used to develop Android apps be it Phonegap, Xamarin or NativeScript. Java has a built-in Android studio to specifically create Android apps.

Now that you know about some of the best mobile app development frameworks, it’s time for you to decide which framework is the best for your next mobile application. Make sure to choose the framework that suits your app requirements best. Be it in terms of usability, programming language, features and functionalities it offers, choosing the right framework can solve half of your problems right away.

Did you find this article helpful? Let us know in the comment section below.