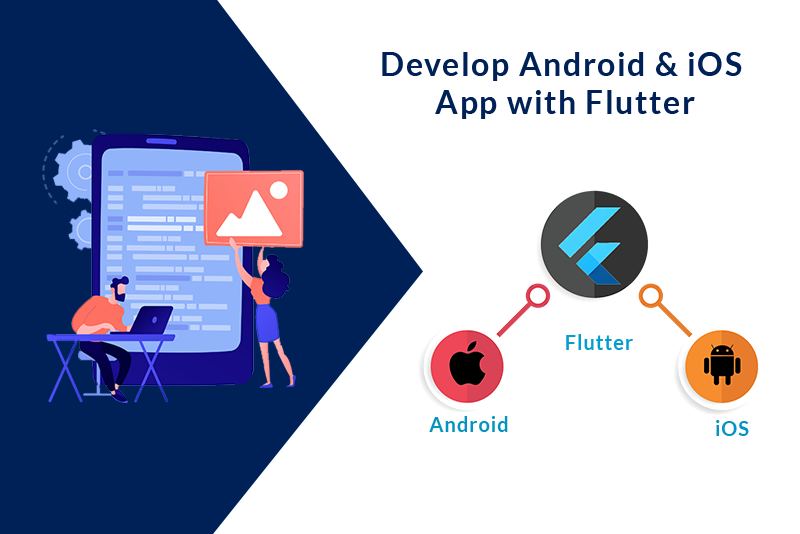 Since the very release of the stable version 1.0, Flutter app development has recently started winning the hearts of the developer community worldwide. As a robust and ambitious mobile app development SDK by Google, the amazing framework allows developers to target both Android as well as iOS platforms at once with just a single code. Isn’t it fascinating to hear?

What makes Flutter even more attractive is the fact that it can make applications compatible with Google’s upcoming Fuchsia operating system.

So as we drift through another week of this quarantine phase, let’s explore something new and exciting in the world of technology. With the ever increasing number of smartphone users, businesses today have to concentrate more on enhancing their user experience on a continuous basis.

As per a survey conducted by Google, a smartphone user has about 35 apps on their device at a time. With the combined App market on Apple App Store and Google Play Store crossing over 1 million, it is an extremely competitive agenda to achieve the top spot.

With the current practices, developers are required to write separate code for both iOS and Android in two different languages.

There’s also the need to keep updating both so as to keep up with the latest features. This leads developers to maintain a uniform experience across applications over two different platforms. This definitely creates a discouragement in the mind of anyone planning for App development. But not anymore with Flutter app development!

A Brief Introduction to Flutter

Flutter is an open-source UI toolkit of Google to build cross-platform applications using a single codebase. With the help of this amazing framework, developers can create smoothly-performing native applications for Android, iOS, and even web platforms.

What differentiates Flutter from other frameworks is the fact that it does not make use of JavaScript. The Flutter platform of Google keeps a single codebase for creating various applications.

While creating the same app for various platforms, developers have to face certain challenges such as source code maturities, UI performance, functionalities, and security tests. Flutter app development can effectively resolve such issues with great ease.

Flutter is an extremely powerful and easy-to-use language for fresh as well as experienced developers. This language can improve their productivity exponentially and the Flutter widgets enables the Flutter app developers to provide a powerful UI experience.

A Quick Look at The History…

With a lot of dedication and attention Flutter was released in December 2018 by Google and it once again takes the momentum when it comes to cross-platform app development frameworks.

Here is an overwhelming amount of news about this technology to see how it rolls out in the market:

So, before diving deeper into the topic, let’s have a quick glance at some interesting facts and figures.

Now we have seen how Flutter provides an expressive and fast way for developers to create native apps on both Android and iOS, using a single codebase.

But now the question arises, how exactly does it work? Let’s find out…

How Does Development in Flutter Actually Work?

Quite similar to any other OOP language, development in Flutter is done using the Dart programming language. The code here gets natively compiled and makes use of the GPU so as to render a uniform UI. Furthermore, it also has native access to platform APIs like Bluetooth and GPS.

Additionally, development in Flutter is majorly just a composition of widgets, which are primarily the building blocks of a Flutter application.

Such a pattern of widget composition is quite easy and leads to faster development cycles. Moreover, widgets that are created once can also be reused across multiple applications. Also, widgets ensure uniform rendering across iOS and Android devices, as well as uniform API for developers to access device native services.

Excited enough to develop your first App in Flutter?

Well nowadays, the mobile app market is inclining toward a powerful user experience-driven app development process. Now, the biggest obstacle here is its division in Android and iOS app. Let’s know for any assistance to develop a cross-platform mobile app using flutter.