Android Q vs iOS 13: The Race to the Top of Consumer Choice 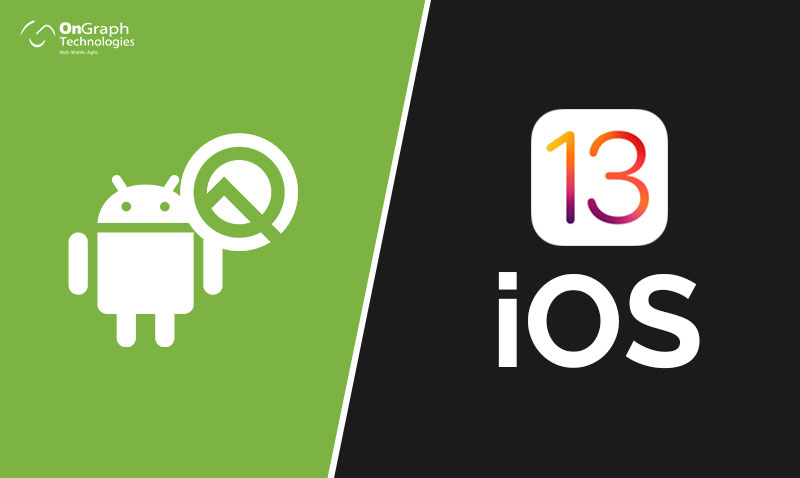 Android or iOS? It has always been a fight since ages now! Both these operating systems are the world’s most commonly used smartphone platforms and people from all over the world are keen to know about their new software upgrades, models, features, and launches.

Recently, Apple had announced iOS 13 for iPhones at its annual WWDC event and has unveiled its latest software upgrades such as enhanced privacy settings and systemic dark mode. The company has promised to make its iPhones, even better, secure, and easier to use.

Google’s Android Q, on the other hand, also brings some amazing and attractive features including dark mode, AI and privacy enhancements.

While Android Q is already in its four beta stage which means it has been launched and is available for use publically, iOS 13’s beta is only available for developers and the final release is expected to be launched soon for public use. iOS 13 will be available for iPhone models launched after iPhone 6.

Therefore, the comparison between Android Q vs iOS 13 is going to be feature-based. It will be based on the recent announcements Apple has made at its developer conference with the ones we’ve seen from Google so far.

Besides reducing the eye strain, the dark mode can preserve the battery life of your smartphone. However, talking about Google Android’s dark more, it isn’t as effective as of iOS. Although it is evenly distributed across the mobile, some Google apps such as Gmail and Chrome still lack a dark mode option.

Apple, on the other hand, masters this area. The dark mode is applicable from wallpaper, widgets, and notifications to Calendar to Messages. Therefore, this point goes to iOS.

When we compare Apple maps with Google maps, Google takes the first place. Although Apple iOS 13 is rebuilding maps to include better information and graphical representation of roads, pedestrian, and precise addresses, Google seems to be having much precise and accurate maps along with 3D mode called Street View. Google maps are best to find places to eat and things to do even if you’re are not physically present in your area.

iOS 13 texting and video calls are one of the best features that are hard to beat. Not only the communications are encrypted end-to-end, but the messaging between MacOS and iOS devices is seamless. Memoji’s can also be used to make your calls even more interesting.

Although Siri has engaged a lot of users’ attention and iOS 13 is expected to come preloaded with Siri Shortcuts, Google Assistant will still be the best voice bot. Apple is trying hard to fill that gap by adding features to Siri like respond to incoming messages through AirPods, it still cannot compete with Google Assistant especially when it comes to recognizing and understanding different voices and commands.

Google assistant can give you recommendations based on your preferences, your calendar, and Gmail. You can find Google assistants everywhere such as on  Android phones and Google Home Mini. although Siri is also widely available on iOS devices, it is still struggling because of the limited database.

Features like gaming, swipey keyboards, editing, and sharing photos are worth noticeable in both the operating systems. When it comes to security and privacy settings, iOS always comes on the number one position.

As the blog consists of a brief comparison of Android Q with iOS 13, it doesn’t cover every feature that Apple or Google announced. However, it has all the elements that amaze people the most and are important to everyday life.